Children treated for brain tumors often have significant long-term effects from the radiation therapy. Even low radiation doses can produce declines in memory and intelligence, as well as damage to the hypothalamus and pituitary gland, which produce or direct the production of essential hormones such as growth hormone, thyroid hormone, cortisone, as well as reproductive and sexual hormones. Low doses of radiation also play a major role in the development of secondary, radiation-induced cancers. A landmark paper from the University of Florida published in 2021 showed that proton therapy reduces the risk of early second tumors compared to treatment with the conventional IMRT.1 Moderate doses of radiation, especially in combination with some chemotherapy drugs, can cause hearing loss and other complications. High radiation doses can occasionally cause very dramatic deficits such as paralysis or loss of vision. In comparison with conventional photon therapy, proton radiation spares more normal tissue, and thus may reduce the risk of many complications.

Medulloblastoma is one of the most common malignancies in children. It usually starts in the 4th ventricle region of the brain. However, it is a high-grade tumor that can use the fluid circulating in the nervous system to spread throughout the brain and spine. Although surgery is needed for diagnosis and symptom relief, the most important part of the treatment is radiation therapy, including radiation to the entire brain and spine. This treatment, called craniospinal irradiation (CSI), is usually given within a few weeks after surgery. In addition to the usual risks of treating the central nervous system mentioned above, spinal treatment with conventional radiation gives radiation to the lung, heart, thyroid, bowel, liver and kidneys, and gonads. Proton therapy significantly reduces radiation to the lungs and eliminates radiation to other organs. After CSI, additional radiation is given to the tumor itself or surgical bed in the fourth ventricle. The use of protons for this part of treatment will decrease the long-term intellectual, hormonal, and hearing effects by eliminating excess radiation to those sites.

Atypical teratoid rhabdoid tumors (ATRT), supratentorial primitive neuroectodermal tumors (S-PNET), pineoblastomas, and non-germinomatous germ cell tumors (NGGCT) of the central nervous system are similar tumors to medulloblastomas, but can occur in all parts of the brain. They frequently require CSI and therefore derive similar advantages from proton therapy. When these tumors occur outside the fourth ventricle, proton therapy may be recommended to spare the brain’s developing intellectual regions, hormone centers, and pathways controlling vision and hearing. ATRT is a particularly difficult tumor to treat with conventional radiation because it most often occurs in infants and requires intensive chemotherapy in addition to radiation. There is growing evidence that proton therapy offers a less damaging approach to treating these infants, particularly in patients who have undergone a complete surgical resection. In 2018, researchers from the University of Florida published the results from their experience treating NGGCT in children, the largest series to date involving proton therapy.2

Ependymomas are tumors that originate in or near the ventricles of the brain, which are cavities that contain cerebrospinal fluid (CSF). Ependymomas arise from the cells lining the ventricles, often in the fourth ventricle. The most important treatment for an ependymoma is careful surgical removal, but radiation therapy is required after surgery to reduce the risk of recurrence. When ependymomas occur in the fourth ventricle, proton therapy nearly eliminates radiation to the hormone and intellectual centers of the brain, as well as the middle ear, which occurs with even the most sophisticated conventional radiation therapy techniques. Information available at the present time indicates that avoiding even low doses to these important areas of the brain will reduce treatment effects on the child’s intelligence, memory, hearing, and hormone production. Ependymomas of other regions of the brain can benefit from proton irradiation as well. Supratentorial ependymomas, which occur in the cerebral hemispheres, are often treated with a proton therapy technique that completely spares the opposite side of the brain from radiation. In 2021, together with researchers at Massachusetts General Hospital, the pediatric team at the University of Florida published the largest experience of children treated with proton therapy worldwide, confirming that the new technology is at least as effective as traditional radiation.3

There are important structures in the third ventricular area of the brain including the visual apparatus, the pituitary gland, and the hypothalamic gland. Also surrounding the third ventricle the temporal lobes harbor memory and other aspects of intellectual function, making this area particularly susceptible to both surgery and radiation injury.

Craniopharyngiomas are not malignant, but can cause injury through pressure on the brain. They originate just above the base of the skull and below the brain and may grow slowly, usually developing a cystic component (a cavity filled with fluid) and a solid component, which may calcify. Complete removal is frequently not possible without significant brain injury. The best treatment is often drainage of the cyst followed by radiation therapy. In 2016, the University of Florida, in collaboration with St. Jude Children’s Research Hospital, concluded the largest craniopharyngioma study in North America. Results are expected to be published in 2021.

Germ cell tumors or Central nervous system germinomas likewise occur in the central part of the brain but their tendency to seed through the ventricles requires radiation treatment in two phases: One encompassing all the ventricles of the brain and the second focused just on the tumor. Proton therapy for tumors of the third ventricle region can better spare adjacent tissues than conventional radiation therapy. This means less radiation to intellectual and memory centers in frontal and temporal lobes, which should decrease the long-term intellectual effects of treatment. In certain cases, proton therapy may also decrease the radiation dose to critical hormone centers, the visual pathway, and the brain stem.

Gliomas are the most common pediatric brain tumor and encompass a diverse group of high grade and low grade tumors. Low grade gliomas can arise in the optic (visual) nerve from each eye, in the chiasm (where the optic nerves from each eye join together), or in the hypothalamic region. These may be grouped as optic pathway gliomas. The hypothalamus, which is above and behind the pituitary gland, directs the pituitary gland to produce many of the hormones required for normal bodily function.

Although many low grade gliomas can be cured with surgery alone, high grade gliomas or unresectable low grade gliomas are effectively managed with radiation. However, even the most advanced conventional radiation techniques can be associated with a variety of short-term and long-term side effects depending on the specific tumor location within the brain. The focused nature of proton therapy may allow the delivery of curative radiation doses with less impact on the developing adjacent brain tissue. In 2019, researchers from the University of Florida published their results of treating 174 children with proton therapy, the largest experience worldwide.4 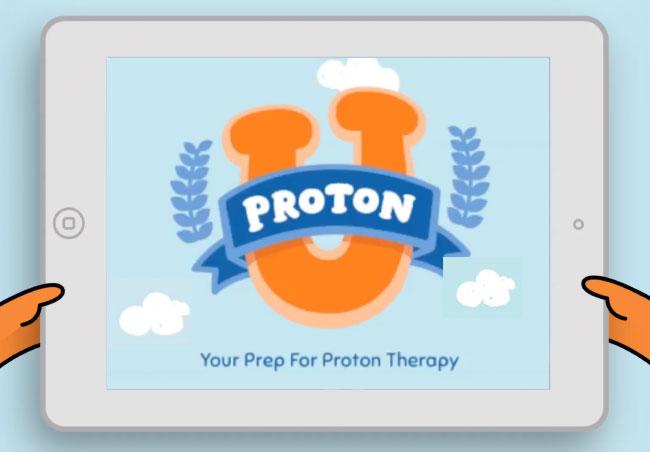 What is Proton U?

An app to prepare pediatric patients for proton therapy.

Types of pediatric cancer treated with proton therapy include: