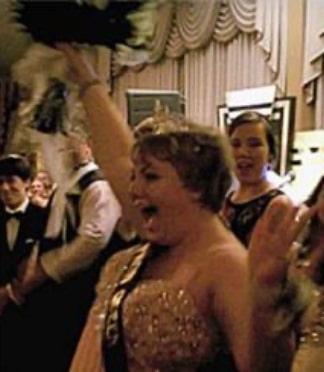 At seven years old, Kathleen was diagnosed with cancer and underwent surgery and traditional radiation to remove the tumor located along her spine. The treatment was successful and Kathleen went on with her life as any normal little girl would. However, children are especially vulnerable to various modalities of treatment as their healthy tissues are still rapidly growing and the effects of treatment, particularly radiation, are magnified.

When Kathleen was in eighth grade, she found out that her initial radiation had caused a rare secondary rhabdomyosarcoma tumor that wrapped twice around her spine. "It was tough and scary," said Kathleen. "But, as a kid and teenager, I think we do have a little bit of a different outlook on the situation. We're still kids and we'll still find ways to goof off – even if we do have cancer." Because of the rare location of her tumor around her spine as well as the reoccurrence from her previous treatment, Kathleen was referred to a regimen of nine months of chemotherapy and proton therapy.

"When you get your first chemo treatment, it's like the worst thing ever. It was such a relief when I started at the UF Health Proton Therapy Institute and found out that this really wasn't that bad. It was nice and I actually felt great. It didn't hurt, I got to take a nice nap every day and drink lots of hot chocolate," said Kathleen.

Kathleen, now four years cancer free, recently graduated high school, was prom queen and is now just beginning her college career and enjoying the next phase of her life. For her, two rounds of cancer wasn't something to fear, but rather to overcome.

"It helps enhance you as a person. I can't imagine my life without cancer," said Kathleen. "It really made me the person I am today. I wouldn't be me if it hadn't been for the people I met and the things I went through."

"I want kids who are going through cancer to know that it's not necessarily the end of the world. It seems like it at times, but you can do it. For people out there who have a friend with cancer, my advice is to just be there for them. They're ordinary people just like you, so just treat them like a regular person. Because even though they're going through something extraordinary, it doesn't mean they don't want to be normal too." – Kathleen Patti