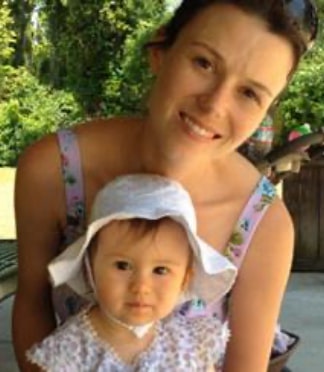 “Any time whatever I am facing in life starts to feel challenging, I remember where I’ve been and what I’ve been through. It reminds me of how strong I really am and how I’ve been guided and blessed even in the darkest times in my life,” said Anastasia Spiecker.

More than six years ago, Anastasia had a suspicion something felt “off” in her body when she began to develop severely itchy skin and night sweats. Because these symptoms could be associated with several more minor causes, none of the doctors Anastasia spoke with over the course of a year ever gave her reason to think it could be anything as serious as cancer. While on vacation, the symptoms became so intense she couldn’t tolerate them any longer. Anastasia went to an emergency clinic where they did a chest X-ray and CT scan and found a 17 cm mediastinum tumor in her chest.

"I met with my doctor who explained the process and told me I would be a good candidate for a study he was doing. The fact that proton therapy is more targeted and efficient, and has a smaller chance of causing or contributing to undesirable side effects down the road was compelling to me."

After being diagnosed with Hodgkin lymphoma stage 2B, Anastasia went through ABVD chemotherapy and was advised to undergo a radiation treatment as a follow-up to ensure all microscopic cancer cells were killed.

“I was wary of having radiation after receiving chemotherapy due to the increased risk for late side effects. However, a friend of mine told me about proton therapy so I went for a consultation,” said Anastasia. “I met with my doctor who explained the process and told me I would be a good candidate for a study he was doing. The fact that proton therapy is more targeted and efficient, and has a smaller chance of causing or contributing to undesirable side effects down the road was compelling to me.”

Anastasia’s treatment went very smoothly overall. Compared to chemotherapy, she recalled the treatment itself was very easy and allowed her to maintain normalcy in her life. “I’ve performed as a singer/songwriter in St. Augustine and Jacksonville since my mid-teens and at the time of my diagnosis and treatment I was earning most of my income through performing. I was able to continue performing throughout chemo and proton therapy, though I did so at a slower pace,” said Anastasia. “My diagnosis pushed me to record a full-length album collection of a selection of songs I had written over the years and I had a CD release party in St. Augustine on May 12, 2009. Coincidentally, I gave birth to my daughter exactly four years later on May 12, 2013, which was Mother’s Day.”

When Anastasia finished her proton therapy treatment in October 2009, she packed her bags for Tallahassee and began pursuing a master’s in music therapy at Florida State University. While her diagnosis and treatment delayed the start of her graduate school experience by a semester, Anastasia was determined for it to not change her course.

“I am grateful for every day after surviving cancer. It may sound cliché but it’s true,” said Anastasia. Her favorite thing to do is to spend time with her daughter, watching how she transforms over time and embraces life. Anastasia also continues following her passion for music as a guitar and piano teacher in St. Augustine.

To other survivors, those going through treatment or those just diagnosed with cancer, Anastasia gives this advice, “Let people help you, even just by being there for you. No matter what happens, do your best to stay positive. We may not be able to control all things but we do have some control over how we react in the face of adversity. Allowing the people who really care about you to stay close to you and support you is healthy.”