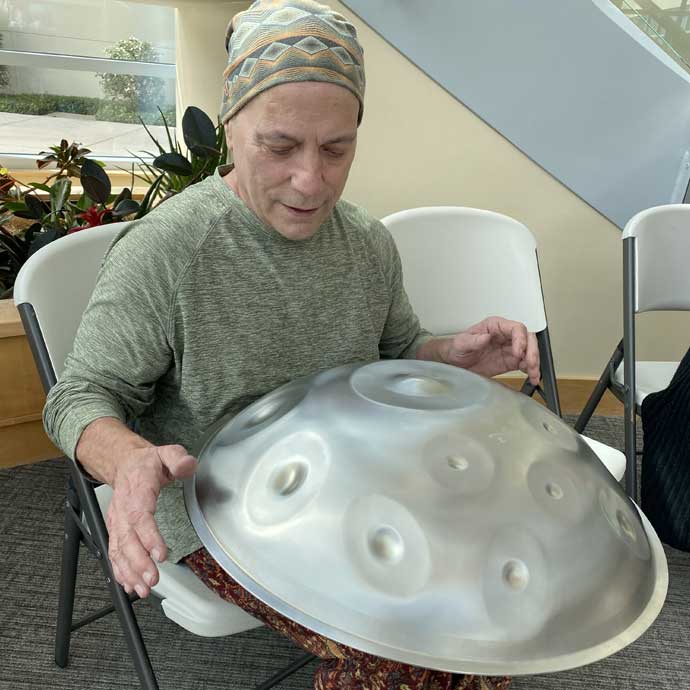 A finger tap coaxes a gentle sound from the dimpled surface of a flying saucer-shaped instrument made of hand-hammered sheet metal. The vibration from the musical instrument, called the handpan, moves and resonates through The Players Lobby at the UF Health Proton Therapy Institute. Some say it is a calming, soothing sound. Some say it is the sound of healing.

The live music performances are a gift brought to the Institute every Tuesday since December 2019 by John Guinta, founder and president of the nonprofit Streams of Sound, a handpan collective based in Jacksonville, Fla., that performs in healthcare settings, yoga studios and more. Their mission is to foster healing through stress reduction and relaxation that the restorative sounds of the handpan can provide.

John, a retired air traffic controller, first heard the handpan 10 years ago when he attended a yoga class accompanied by a handpan musician. Soon after, he purchased a handpan, took a few lessons and started improvising music. For five years, he traveled the country performing at yoga studios for donations. Then his mother became sick, and he went home to help care for her. During her final days in hospice, John played the handpan for his mother and family members. Other families caring for loved ones in hospice noticed the peaceful sound and begged John to play a few songs. He said this was the moment he realized the good he could do by bringing the healing sounds of handpan to people who are sick.

According to Bradlee Robbert, Director of Operations at the UF Health Proton Therapy Institute, “Streams of Sound has been fantastic particularly during the pandemic when we had to temporarily suspend many of our patient support activities. To have music that could come into the lobby in a protected fashion, masked, distanced, but yet provide a phenomenal, soft, gentle background noise really helped relieve stress for many patients during an unbelievably stressful time.”

“We are thankful for the weekly performances of the Streams of Sound musicians. And we are honored to have been chosen for the special performance by these amazing artists from around the world,” said Bradlee. For more about Streams of Sound, visit https://streamsofsound.org/.