From Prostate Cancer Treatment to the Pickle Ball Court 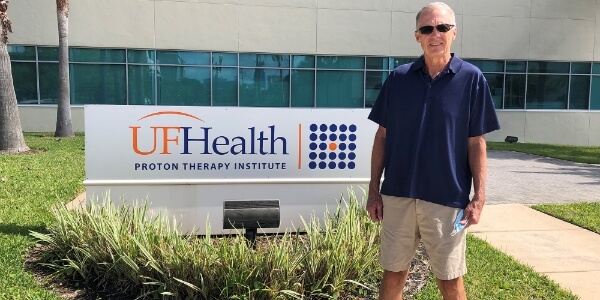 Eddie Watts is just on the other side of his prostate cancer treatment and is joyful to have found proton therapy. He is continuing the next leg of his journey through life where his friends will often find him on the golf course or in a heated pickle ball match.

“I am so relieved that I have been treated and can finally be cancer-free and not worry about it anymore. Being a cancer survivor is a wonderful feeling knowing that you beat it,” said Eddie.

His cancer story began in 2016, when his urologist performed a biopsy and found low grade prostate cancer. Eddie began researching his options for future treatments the following year and found proton therapy to be a viable option for the future. In 2017, he met with Curtis Bryant, MD, MPH, and other staff at the UF Health Proton Therapy Institute, and he knew then that when the time came, this is where he would be treated. He says, “I was given such a warm reception and all the people there were nice and so professional.”

Following three additional biopsies and five years of monitoring his cancer, it had grown and was no longer at the lower grade it once was. In March 2022, he arrived in Jacksonville to begin his course of treatment led by Dr. Bryant.

Eddie stayed busy in between treatments in Jacksonville, Fla., by getting to know other patients at the facility. He became particularly fond of three men also undergoing treatment, and they would often grab meals together, visit the beach, play golf or pickle ball. Eddie says of that time, “It was important for all of us to bond and do things to pass the time. At times if felt like I was on a vacation!”

He finished his cancer journey on May 25, celebrating it by ringing the chimes in the lobby. He resides in Charlotte, N.C., and looks forward to everything that lies ahead.