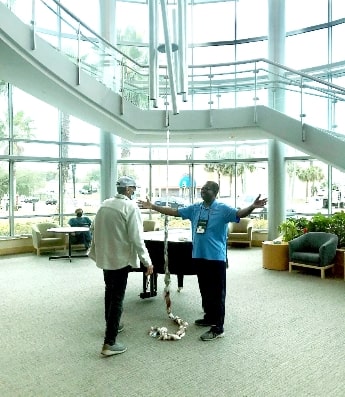 Cancer survivorship is increasing as preventive screenings and modern treatments make inroads to curing cancer. According to the American Cancer Society, the risk of death from cancer dropped by about 2% a year from 2015 through 2019 compared to 1% a year during the 1990s. Accelerating declines in the cancer death rate show the power of prevention, screening, early diagnosis, treatment, and our overall potential to move closer to a world without cancer.

For Lee Moultrie III, 65, it’s all about recovery after his treatment. He looks forward to mowing the lawn or heading to the gym – any activity that keeps him active. One of the most important parts of his recovery is advocating for proton therapy and reaching people of color in their communities where he hopes to help those in need navigate the healthcare system. He is thankful that a community program prompted him to start early screenings 20 years ago and ultimately led to his prostate cancer diagnosis six years ago.

In his late 30s, he found a yellow bag in a barber shop asking the question: “Do you want to learn more about prostate cancer?” He was intrigued and called the number on the bag for information. This conversation would begin his path in healthcare advocacy as well as lead him at age 39 to monitor the level of PSA in his blood. The PSA, or prostate-specific antigen, is a protein produced by the prostate’s normal cells and cancer cells; an elevated PSA level in the blood can be the first sign that prostate cancer is present, since there are often no symptoms. At the same time, Lee started working with the South Carolina African American Tobacco Control Network and an initiative with the same group called Brothers Against Prostate - Cancer Awareness Program, funded by the American Cancer Society.

Testing his PSA levels regularly (and early) led to an early prostate cancer diagnosis. “Early detection saves lives,” says Lee. He chose to manage his diagnosis initially with “watchful waiting,” meaning he monitored his health and continued having regular PSA tests to check for changes. Six years later, the test results indicated it was time to seek treatment. As he was reviewing treatment options, he discovered proton therapy.

During a prostate cancer support group Zoom meeting, a fellow member held up a copy of the book You Can Beat Prostate Cancer and You Don’t Need Surgery to Do It. This is where he was introduced to proton therapy. Moultrie says, “I opted for proton therapy because it was noninvasive and outpatient. Quality of life was not as impacted.”

Choosing Treatment Backed by Compassion
There were several reasons Lee chose the UF Health Proton Therapy Institute for his treatment. There were more convenient options he says, but he immediately felt welcomed to the Institute in Jacksonville. He was also impressed by their long-standing reputation of treating patients with proton therapy. He began treatment in the winter of 2021.

Lee talks a lot about the “nurturing environment” he discovered at the UF Health Proton Therapy Institute. He says, “With my 22 years of health education/advocacy, I was monitoring a lot of interaction and the facility exceeded in every area of touch points with patients and caregivers.” He recalls feeling excited to complete treatment and ring the chimes but also sad to the leave patients and staff who became like family to him during his eight-week treatment course.

Renewed Advocacy Cancer-Free
Lee is newly cancer free and excited to be 65 and looks forward to the next 60 years of living. He is incorporating healthy foods and exercise into his daily routine, as well as ramping up his community health advocacy efforts post cancer treatment. While in treatment, he met another patient that lives in his same South Carolina neighborhood. They meet regularly to discuss how to reach more men, especially men of color, and how to encourage them to seek regular check-ups with their healthcare providers. They also teach them more about proton therapy, which can treat so many types of cancers less invasively. He believes it is important for the African American community to hear from other African Americans regarding health issues and he’s proud to be one of those voices. “Being a Black man, I wanted to go into the community to help others,” Lee said. He has established relationships within many diverse communities (Hispanics, Asians, Caribbean, Black Americans, and more) to share the good news about proton therapy and encourage them to seek regular healthcare appointments. His message is inclusive for individuals, regardless of ethnic background or gender, and he stresses that regular healthcare appointments that lead to early detection is key for everyone.